Published by Lisa Hernbloom on February 19, 2016

The recent movie, The Fury horrifies us with the cold brutality of Hitler’s S.S. The modern classic, Schindler’s List leaves us outraged by the atrocities committed against the Jewish people. And in many of the movies, we feel a profound sense of justice as Allied soldiers use force to quell the tide of Hitler’s heinous brand of fascism.

What many of these popular works do not explore is how so many young men and boys became devout followers of their Fuhrer.

To better understand how Hitler gained the unquestioning support of Germany’s youth, we must travel back in time to the end of World War I as the League of Nations developed the Treaty Versailles, which treated Germany much like a naughty child. As a result, Germany was stripped of both military power and territory, and forced to make reparations that some deemed excessive. Add to this the loss of life from the war itself, and Germany was a hurting nation, ripe for a leader who could restore hope.

When I asked someone why his grandfather had joined the Hitler Youth, he explained:

“He felt he could finally be proud of Germany for once. They finally had hope for the future.” 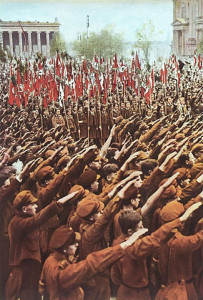 Hitler Youth members performing the Nazi salute at a rally at the Lustgarten in Berlin, 1933

In an era of economic depression when many were unemployed and hunger was a common phenomenon, the promise of work and a restored Germany was tantalizing. People would be able to put food on their tables. Care for their families. Be proud of their country once again.

When one views actual footage of Hitler Youth camps and competitions, it is not difficult to see the appeal for boys. Their athletic abilities were constantly challenged with intense hikes, races, and games. These boys knew they were being trained for Hitler’s Wehrmacht, which was an even greater source of pride. They were charged with the responsibility of protecting the German people and combatting the enemy.

Year after year in school, children learned that the Jewish people were responsible for the downfall of their country, and that racial purity was essential to Germany’s success.

In one of the documentaries I recently viewed, an elderly man who had once been a member of the Hitler Youth explained that, after six years of indoctrination, he was not the least bit concerned when a friend of his was deported. Imagine how desensitized he would have been to the deportation of someone he had never met.

While many Hitler Youth retained their devotion throughout their career in the Wehrmacht, many were shell shocked by the horrors of war—and were even more stunned when the Allied soldiers showed them the victims of their nation’s concentration camps. One former member explained that it took him nearly a year to grasp and accept what had really happened at those concentration camps. Many of the boys thought that it was some sort of trick, that they hadn’t really starved, tortured, or murdered these men, women, and children.

Clearly, these young men had been misled and used. One might even characterize the brainwashing of these youth as abuse. This is certainly not to say that there is no guilt. If you view a documentary or speak to a surviving former member, you will likely see and hear the regret that they have carried for many years. What they believed to be their greatest source of pride became their greatest source of shame.